skip to main | skip to sidebar

At this time of year my thoughts begin to turn towards zander. Actually that's not strictly true, usually it's not until about March, but a couple of weeks ago I received an email from Snapper. He is going to be manning the Ocean Kayaks stand at the NEC boat show in February and wondered if Ben and I could find him some fishing in the evenings, he's particularly keen to try for barbel and zander. This sent me into a state of panic, we can't let him down after the fantastic cod fishing he put us onto in October but my success with zander could best be described as inconsistent. Fortunately Ben has assumed the mantle of barbel expert or I really would be in the poo.
In the past all of my zander have fallen to lures and I have always felt they've been the result of good luck rather than angling prowess. I have spent hours pounding the towpaths of the Grand Union and been lucky if I've caught one fish during a session. I've also had a couple of fish from the Avon when fishing from the bank but have yet to catch one from the kayak.
Clearly a new approach is needed and to this end I've been feverishly researching articles concerning zander and come to the conclusion that deadbaiting is the way forward on this occasion. I remain convinced that lures will be a more efficient method once the areas where the fish hole up have been located, but it will undoubtedly be pitch black when we take Snapper, and the zeds will probably be actively out hunting.
So, with this in mind I've gone back to basics in the hope of finding a few fish. The first attempt was Sunday night, by the time I'd dropped the kids back home it was 8pm so I headed to a nearby stretch of the Grand Union where I'd had success before. The rig used was a headless roach on a sliding float ledger as this would give good bite indication with a minimum of resistance. Research had told me that I needed to use plenty of lead so that the weight wouldn't move if I got a bite, which could result in a spooked fish. As it turned out I never got to put this theory to the test. I fished for about two hours without a touch before packing in and going home.
Tuesday night was to be the next attempt but just as I was making up my flask of coffee Ben phoned, by the time we'd stopped chatting it was getting on for 9pm. I looked out of the window at the frost covered car and thought, NAH.
Wednesday evening came and I wasn't going to be deterred this time. It was a lovely mild moonlit night and I was feeling positive. This time I made my way to the canal at Bascote and gradually made my way along the bank, fishing each spot for 20 minutes or so. In hindsight I should have just left the bait in one place and waited for the 'vast marauding shoals of zander' (that's what the guy in the tackle shop said, so it must be true) to find it. After a couple of hours I decided to head back to the lock where I'd fished on Sunday as it had 'felt' much more fishy. The first hour here passed without incident and I thought I'd have a coffee and a smoke before moving up the swim a little, as I poured my drink I saw the float bob slightly so I ran to the rod and hovered expectantly......and nothing happened. Back to the coffee then, after another 15 minutes I was beginning to lose concentration from focusing on the float when it suddenly slid from view. I struck and there was a good weight on the line which resulted in my first bait caught zander of 4lb 12oz, result.
Apologies for the poor quality pic. 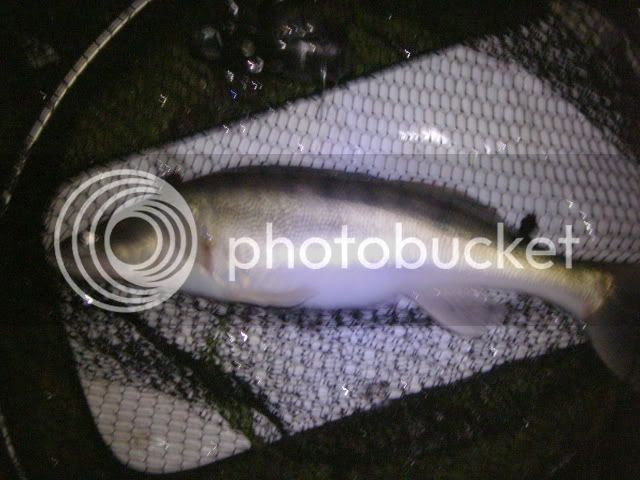 I hope to get a few more sessions in before Snappers arrival and I'm considering taking the kayak along so that I can survey a few stretches of canal with the sonar. Ideally I'm sure we'd rather fish the Avon but at least we now have a planB.
Posted by AndyD at 22:34 No comments:

Sunday morning arrived and with it the first chance to go fishing since Ben and I went barbelling on the Severn. The plan was to do more of the same, but with the thawing of the recent heavy snow everything hinged on the state of the river.
Unfortunately, on arrival at Bridgenorth our worst fears were realised. The river was higher than on our last trip and was flowing through at speed. After much deliberation I had to concede that I wasn't comfortable with launching in such a torrent and so we decided to try the canal for pike. I felt a bit of a wuss at bottling it but I think the right decision was made, there will always be another opportunity and if either of us had got into difficulties there would have been no way that the other could have assisted.
Back in the cars and it was off to the cut. This was where we encountered snag no.2, despite the mild weather over the last couple of days the canal was still frozen solid.
No matter, Ben had one more possible venue and so we hit the road once more. This was the last chance saloon and on pulling into the car park I could see water! As it turned out, there was probably only 200 yards of canal which had seen enough sun to thaw out but it was better than nothing. Armed with two rods apiece, one for deadbaits and one for lures, we plotted up next to some narrowboats and proceeded to fish. An hour passed and after no interest on lures or lamprey we headed along the canal to try a stretch further along. It soon became apparent that this just wasn't going to be our day and after another fruitless hour we decamped to the pub.
This turned out to be the best decision of the day, and we warmed up whilst we discussed the forthcoming year's angling challenges.
All in all then, it was a disappointing days fishing but there is much to look forward to and it was better than going to work.
Posted by AndyD at 01:11 No comments:

My fellow kayak fishing nut Ben and his better half Deb kindly invited me over to their place for a New Years Eve soiree followed by a day on the Severn to start our 2010 species hunt. I didn't need asking twice and was looking forward to it all over Christmas.
As luck would have it my gaffer was away on Thursday so I knocked off early and after a quick wash and brush up I was on my way to Wolverhampton. I arrived to find Ben already had a houseful and was cooking up a storm in the kitchen. Without going into too much detail a cracking night was enjoyed by all, and after being well fed and plied with plenty of red wine and Jamesons we got to bed at around 3:30.
Needless to say the planned early start never happened and the morning was spent setting up tackle and mixing Ben's special groundbait (don't worry mate, I won't tell Deb what you used her kitchen scissors for ) in between mugs of strong coffee and bacon butties.
The plan was to launch at Ironbridge, negotiate the rapids and then try for some barbel before heading down to Bridgenorth where Deb would pick us up. With the cold temperatures and strong flow in the river I wasn't overly optimistic but Ben had 'a feeling' and that was good enough for me.
On kitting up at Ironbridge a dog walker stopped to talk to us, he couldn't believe what he was seeing and on hearing that we were intending to fish as well as kayak he nearly fell over. He just kept repeating 'you're not right, either of you'. He had a point.
We had a look at the rapids, and although the river was snorting through Ben assured me it was 'doable' and so it was that I embarked on my first whitewater paddle. What a buzz! I can't think of a better way to cure a hangover, we were flying along. 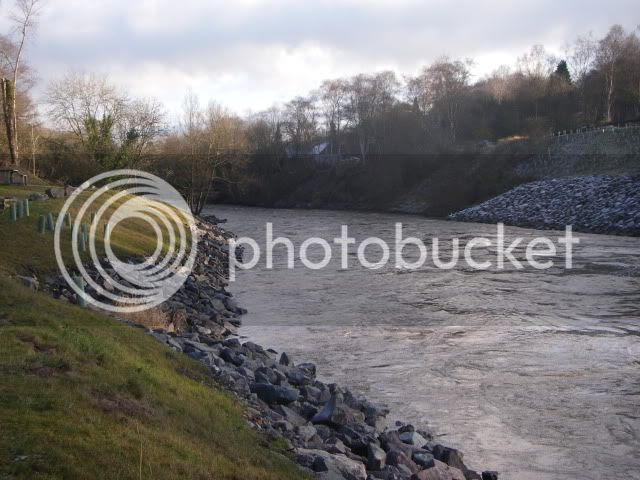 We rounded a corner to find a new whitewater section had appeared due to the heavy flow. I heard Ben shout 'shhiiiiiiiit!' in front of me as he approached a huge standing wave, he managed to go around it. I was a little slower to react and ploughed through the middle of it. I got a faceful of icy water and swamped the cockpit but the spro handled it well and the scuppers soon drained.
After this excitement things settled down, and we paddled on to Ben's barbel swims. Ben spotted an otter on the way down, but despite us turning round and paddling back upstream I couldn't get a glimpse. 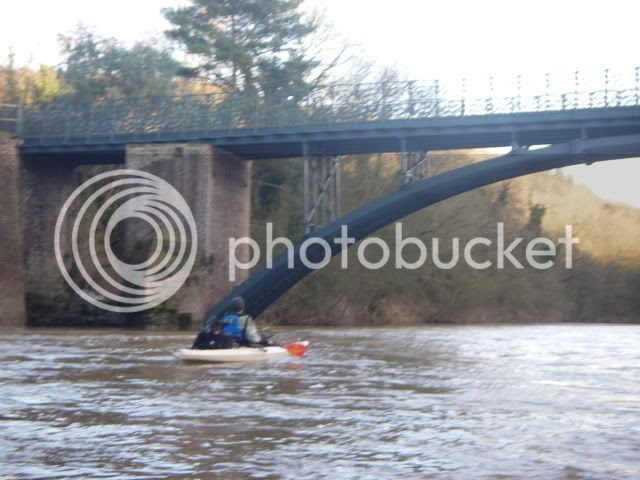 On arrival at Ben's secret mark we tied off to some overhanging branches and he started to feed the swim whilst I faffed around with the fiddly coarse fishing tackle. Ben soon announced that we were ready to fish and cast his rig under some overhanging branches. We didn't have to wait long before he got a bite and was into a good barbel. His rod was bent double as the fish powered upstream and under the kayaks before throwing the hook.
With renewed enthusiasm we started fishing again and after a while I had a good bite that I missed through striking too soon. Things went quiet for a while and we had a coffee from the flask that Deb had made up for us. The light was starting to fade now and the temperature was dropping fast. Ben remarked that he thought he'd seen his rod tip twitch and wound down to find the rod bend over.......fish on!
He played the fish while I fumbled around for the net, these are hard fighting fish and despite this being quite a small one it put up a good struggle before we finally got it in the net.
The smile says it all! 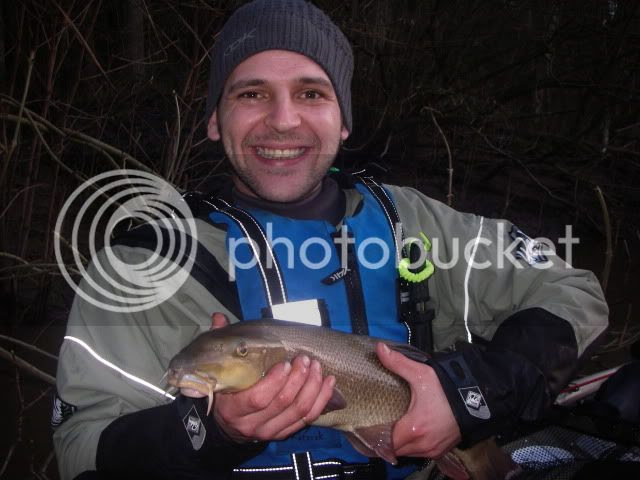 After taking some pics and admiring the fish it swam away strongly. 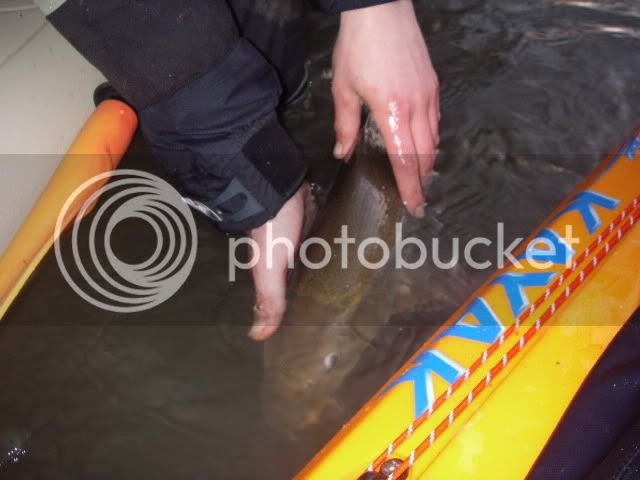 We had a last cast to try for another fish but by now it was getting dark and so reluctantly we packed up and headed down to Bridgenorth, and by the time we reached the slip the kayaks had a thick layer of ice on them. 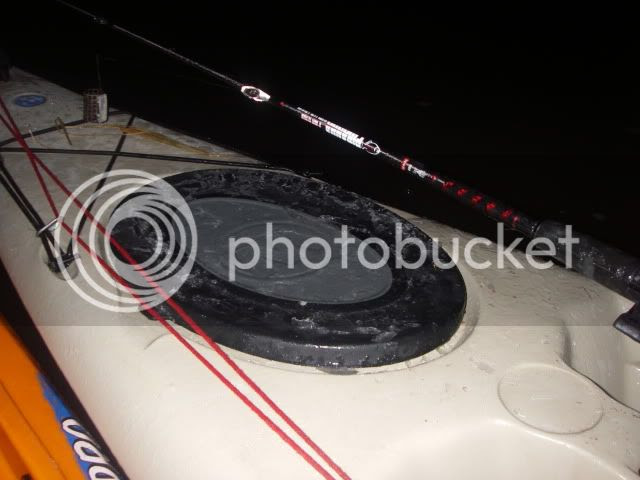 At this point I should mention that Deb is an absolute star. there can't be many of us with partners who would drop off and pick up a pair of lunatic yakfishers after staying up till 4:30am to tidy up after a party. She had even found the time to knock up a fantastic bolognaise for when we returned.
So, the species list stands at Ben 1, Andy 0 and 8 or 9 miles paddled. I'll be back.
Posted by AndyD at 01:03 No comments: